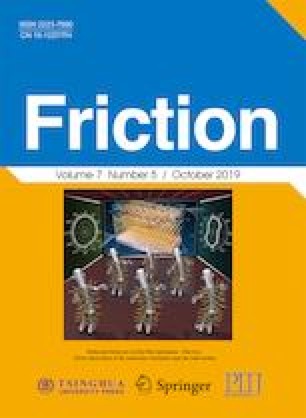 Over the past twenty years, thin film lubrication (TFL) theory has been used to characterize the molecular behaviors in lubrication films thinner than 100 nm, effectively bridging the gap between elastohydrodynamic lubrication and boundary lubrication. Unfortunately, to date, the TFL molecular model proposed in 1996 has not been directly proven by experimental detection. Herein, a method based on surface-enhanced Raman spectroscopy was developed to show both the packing and orienting of liquid molecules in the TFL regime. By trapping liquid crystal molecules between a structured silver surface and a glass surface, molecular ordering states dominated by shear effect and surface effect were successfully distinguished. A nanosandwich structure consisting of an adsorbed layer, an ordered-molecule layer, and a fluid layer was demonstrated. Molecule imaging in TFL was achieved. Our results illustrate the molecular behaviors and lubrication mechanism in nanoconfined films and facilitate the lubrication design of nanoelectromechanical and microelectromechanical systems.

Ming GAO She received her bachelor degree in material forming and controlling engineering from Huazhong University of Science and Technology in 2011, Wuhan, China. Afterwards she pursued her Ph.D degree in the State Key Laboratory of Tribology at Tsinghua University, Beijing, China and got her Ph.D degree in mechanical engineering in 2016. Her research interest is molecular behaviors in thin film lubrication.

Liran MA. She received her BS degree from Tsinghua University in 2005, and received her Ph.D degree from Tsinghua University in 2010. Following a postdoctoral period at the Weizmann Institute of Science in Israel, she is now working as an associate professor in State Key Laboratory of Tribology, Tsinghua University. Her interests in tribology have ranged from aqueous lubrication and hydration lubrication to the liquid/solid interface properties. She has published over 50 papers. Her work has been cited some 300 times. Her honors include the Hinwin Doctoral Dissertation Award (2011), the Maple leaf award for Outstanding Young Tribologists (2015), and Chang Jiang Scholars Program-Young Professor Award (2015).

Open Access: This article is licensed under a Creative Commons Attribution 4.0 International License, which permits use, sharing, adaptation, distribution and reproduction in any medium or format, as long as you give appropriate credit to the original author(s) and the source, provide a link to the Creative Commons licence, and indicate if changes were made.

The images or other third party material in this article are included in the article’s Creative Commons licence, unless indicated otherwise in a credit line to the material. If material is not included in the article’s Creative Commons licence and your intended use is not permitted by statutory regulation or exceeds the permitted use, you will need to obtain permission directly from the copyright holder.

To view a copy of this licence, visit http://creativecommons.org/licenses/by/4.0/.