Handbook of Group Decision and Negotiation 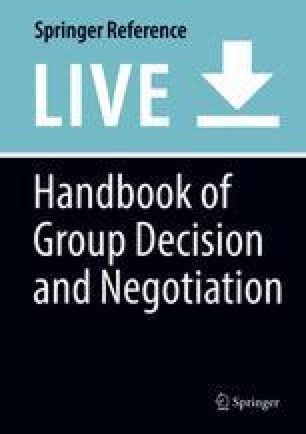 Handbook of Group Decision and Negotiation pp 1-26 | Cite as

Group Support Systems: Experiments with an Online System and Implications for Same-Time/Different-Places Working

We present an analysis of the Group Explorer Group Support System (GSS) from the perspective of its implementation as technology that can support same-time/different-places group workshops. The purpose of the chapter is to report on our experiences with using a same-time/different-places GSS, introduce issues that arise from these experiences, and discuss future prospects. The chapter commences by reviewing our current understanding of GSS and how they support the use of distributed Problem Structuring Methods (PSMs) in both single-organization and multi-organization settings. The configuration and use of a cloud-based online version of the GSS is presented that highlights some of the key technological, organizational, and facilitation issues involved in supporting distributed PSM workshops. The future development of such online GSS is discussed with a particular focus on two emerging research questions: the future role of the facilitator in online GSS and the commonalities between online GSS and social media platforms as different-times/different-places group working, such as crowdsourcing, becomes prevalent in the context of increasing globalization and the ongoing decentralization of work environments.

We would like to thank the many colleagues and collaborators in the STEEP and REPLICATE projects who contributed feedback on the development of the MS-Azure cloud-based implementation of the Group Explorer GSS and its use in the online mode. This work was supported in part by (i) the EPSRC-funded Industrial Doctorate Centre in Systems (Grant EP/G037353/1); (ii) the Innovate UK/NERC project Healthy Resilient Cities: Building a Business Case for Adaptation (Grant NE/N007360/1); (iii) the EU FP7-ENERGY-SMARTCITIES-2012 (314277) project STEEP (Systems Thinking for Comprehensive City Efficient Energy Planning); and (iv) the EU H2020-SCC-2015 (691735) project REPLICATE (REnaissance of Places with Innovative Citizenship and TEchnology).

Appendix A: Setting Up and Running Group Explorer

The (nonstandard) installation of the Group Explorer GSS in the MS-Azure cloud environment is described by Yearworth and White (2017, pp. 80–82). Some of the practicalities of starting up and shutting down the GSS are described here to illustrate the actions that would need to be automated in order to achieve an autonomous++ mode of using the Group Explorer GSS, i.e., unlike the simple autonomous mode, where the facilitator merely leaves the GSS running unattended in one its meeting stages, the autonomous++ mode would not require a facilitator to control the GSS at all. The documents shown in Fig. 7 are currently an essential stage in briefing participants in how to use the online mode of the Group Explorer GSS and would also need to be made known to participants for the autonomous mode. The use of a system for audio conferencing and screen sharing, such as Citrix GoToMeeting, in the online mode is not described here.
Microsoft PowerShell “cmdlets” are used to start up and shut down the Group Explorer hosts Public and Chauffeur with their correct IP addresses in the MS-Azure cloud environment. These simplify management and can be “wrapped up” as Applications on the computer used to manage the system. The operation of these cmdlets as Applications is shown in Fig. 8.

Once an instance of the Group Explorer GSS has been established in the MS-Azure cloud environment using these simple scripting tools, further manual intervention is required to start the Chauffeur and Public components of the GSS. Once these are running, then the methodology requires both manual intervention to move the Chauffeur through the various stages of the meeting and the not inconsiderable task of managing the use of the Decision Explorer component.

Automation of the Chauffeur component seems a tractable proposition, and certain workshop participants (e.g., the sponsor or “owner” of the problem) might be identified as “superusers” and given control via a simplified interface similar to the Applications used to start and stop the servers. However, the control of the Decision Explorer component for the collective benefit of the workshop participants requires a considerable skill on the part of the facilitator as can be seen from the complexity of the user guide described by Ackermann and Eden (2011, pp. 315–330). Some automation to achieve an autonomous++ mode might be achievable through the capture of heuristics from skilled facilitators that could be coded into rules that control the behavior of the GSS and also by ceding some limited control to the same superusers. Developments are underway to achieve some of these capabilities.