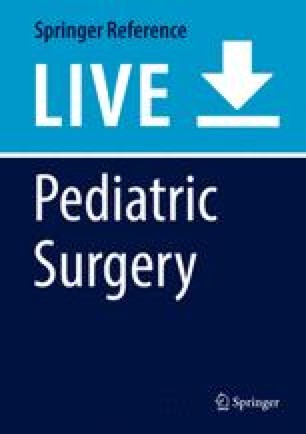 Neonatal gastric perforation is rare and life-threatening condition period and can be associated with overdistension, gastric intubation, ischemia, or idiopathic causes. Infants with this complication have a high mortality (25–50%). Typically there is a constellation of symptoms which can help identify this condition. These symptoms include fever, sepsis, abdominal distension, hematemesis, pneumoperitoneum, and respiratory failure. Recognition of the symptoms allows preoperative preparation including endotracheal intubation for respiratory failure, volume resuscitation, administration of antibiotics, and possible abdominal decompression. Traditional operative approaches and laparoscopy have been employed to correct this abnormality. Operative principles include control of spillage, debridement of devitalized tissue, and multiple repair techniques. Future investigation includes improvements in the understanding of the underlying causes of idiopathic and spontaneous perforation, improvement in prevention of the perforations of known cause, and advancement of repair techniques and approaches.

Siebold, in 1826, is credited with the first description of a gastrointestinal perforation with no demonstrable cause, the so-called spontaneous perforation (Siebold 1826). In 1929, Stern et al. (1929) reported attempts at surgical repair. Agerty et al. reported the first successful repair of a neonatal intestinal (ileum) perforation in 1943 (Agerty et al. 1943), and Leger, in 1950, described the first successful repair of a neonatal gastric perforation (Leger et al. 1950). Survival following a neonatal gastric perforation was rare prior to the 1960s. While mortality has improved since that time, it remains significant and ranges from 25% to over 50% in most series (Rosser et al. 1982).

Gastric perforations in neonates can be broadly categorized as spontaneous (idiopathic), ischemic, or traumatic; however in many instances, the etiology may be multifactorial. Ischemia, necrosis, and perforation may occur with no obvious inciting factors (Pelizzo et al. 1998). Table 1 lists several possible causes and associations with gastric perforations. Spontaneous gastric perforations most often occur on the greater curvature (Rosser et al. 1982). Neonatal gastric perforation can occur in full term, premature, and small for gestational-age neonates. Some infants appear to have been healthy and medically stable prior to the development of the perforation, whereas others have underlying medical conditions or congenital anomalies. There are reports of intrauterine gastric perforation with no known underlying cause (Woo et al. 2006). Unrecognized overdistension or ischemic insult may result in a perforation that is thought to be spontaneous. Ischemic perforations occur in the setting of physiologic stress such as prematurity, asphyxia, sepsis, and necrotizing enterocolitis. The perforations are often associated with ulcerations and ischemic tissue. Traumatic perforation results from pneumatic distension during mask ventilation, positive pressure ventilation, or iatrogenic injury during gastric intubation. Several specific causes of neonatal gastric perforation have been reported including intestinal atresias, prenatal stress, trauma, foreign bodies or bezoars, exposure to corticosteroids, and nonsteroidal anti-inflammatory agents (Table 1). Several theories on the etiology of spontaneous (idiopathic) gastric perforations have been suggested, but no single theory is universally accepted. Theories include congenital absence of the gastric muscle (Braunstein 1954), forces exerted during vaginal delivery (Silbergleit and Berkas 1966), and pneumatic distension (Othersen and Gregorie 1963). Studies in dogs and human neonatal cadavers suggest that rupture is caused by overdistension and is in keeping with the law of Laplace (Shaw et al. 1965). With gastric distension, the greatest wall tension is exerted on the fundus, the site of most spontaneous perforations. In addition, overdistension can cause ischemic changes, a finding present in many cases of perforation (Touloukian 1973).
Table 1

The clinical presentation of gastric perforation is variable. The majority of cases present within the first 7 days of life; however, later presentations are reported (Bell 1985). The neonates are often premature or have a history of asphyxia or hypoxia (Holgersen 1981). Neonates may present with feeding intolerance or emesis that may contain blood. Many develop abrupt onset of rapidly progressive abdominal distension from pneumo- or hydroperitoneum (Aydin et al. 2011). These infants progress to respiratory distress, hemodynamic instability, and signs of shock such as hypothermia, cyanosis, poor peripheral perfusion, and low urine output. The abdomen may rapidly become tense and tender with signs of peritoneal irritation. Ventilation may be impaired or ineffective until the abdomen is decompressed. Subcutaneous emphysema in the abdominal wall or pneumoscrotum may be appreciated (Aslan et al. 1999). Infants with posterior perforations into the lesser sac may present with a more insidious course, making the diagnosis difficult.

Infants with perforation secondary to an underlying process often have evidence of the predisposing condition such as findings of tracheoesophageal fistula, duodenal atresia, malrotation, or diaphragmatic hernia (Holgersen 1981). In some instances, a secondary cause is found at the time of operation. In cases of iatrogenic perforation, a history of traumatic naso- or orogastric intubation, prior surgery, corticosteroid or nonsteroidal administration, and aggressive ventilation or cardiopulmonary resuscitation may be obtained (Graivier et al. 1973).

The diagnosis of gastric perforation is made from the clinical history, physical examination, and radiographic studies. In infants with massive pneumoperitoneum, a plain abdominal radiograph will demonstrate air under the diaphragm that extends laterally, trapping the abdominal viscera medially and producing a saddlebag appearance (Houck and Griffin 1981). The stomach is not visualized by plain radiograph in 90% of cases (Pochaczevsky and Bryk 1972). Other plain radiograph findings include subcutaneous emphysema, pneumoscrotum, ascites, or an oro- or nasogastric tube outside the confines of the stomach. A definitive diagnosis may not be made prior to laparotomy. A water-soluble contrast study will reveal extravasation from the stomach into the peritoneal cavity (Fig. 1). Ultrasound may show ascites or fluid collections. In premature infants with known lung disease, pneumoperitoneum can result from air tracking from the mediastinum. A chest film demonstrating pneumomediastinum, an air–fluid level in the stomach, a negative peritoneal aspirate, and an intraperitoneal drain that bubbles with the ventilator cycle can help to exclude an intra-abdominal process.

Infants with gastric perforation develop septic parameters and need to be resuscitated accordingly. Neonates may become unstable prior to the development of free intra-abdominal air. Infants who develop respiratory distress require intubation, and increased ventilator support is needed as the abdomen becomes more distended. Appropriate laboratory investigations include blood cultures, white blood cell count, hemoglobin, hematocrit, platelet count, electrolyte profile, and blood gas analysis. Broad-spectrum antibiotics should be initiated. Fluid boluses and blood transfusions are given to achieve hemodynamic stability and adequate urine output. An oro- or nasogastric tube should be carefully passed and placed on low intermittent suction. Once free, intra-abdominal air is identified, the patient is stabilized, and a laparotomy should be performed. Aspiration of the peritoneum with an IV cannula when an overly distended abdomen is impeding ventilation can be a life-saving measure (Touloukian 1973). In select cases, peritoneal drainage has been reported with resolution of the peritonitis and healing of the perforation (Aydin et al. 2015).

Traditionally, open exploration and repair are required. Recently, successful laparoscopic repair of neonatal gastric perforation has been reported (Gluer et al. 2006). For an open repair, an upper abdominal transverse skin incision (Fig. 2) is made and dissection carried through the rectus muscle until the peritoneum is entered. The umbilical vein is divided. The incision can be extended as needed. Peritoneal fluid and debris are evacuated. The abdomen is explored for the site of perforation. When a perforation of the stomach is not found, careful exploration of the gastroesophageal junction, duodenum, small bowel, and colon should be performed. The lesser sac should be opened and inspected for contamination and integrity of the posterior surface of the stomach.
The most common site of a spontaneous perforation is near the greater curvature. Yang et al. (Yang et al. 2018) reported that the site of gastric perforation among the 68 patients was greater curvature in 50 (73.5%) neonates, lesser curvature in 12 (17.6%) and unspecified in 6 (8.9%). The perforation can be small or extensive and extend high on the stomach. For isolated perforations, the devitalized edges of the perforation are debrided back to viable tissue (Fig. 3). The defect is closed in one or two layers and may be reinforced with an omental patch (Fig. 4). Stapled closure of a perforation and repair around a gastrotomy tube have also been successful. A variety of techniques have been used to manage extensive perforations or necrosis that requires subtotal or total gastrectomy. In a stable infant, subtotal gastrectomy can be performed with reconstruction and esophagogastric anastomosis (Bilik et al. 1990). Several techniques for reconstruction after total gastrectomy have been reported including transverse colon interposition, Roux-en-Y esophagojejunal anastomosis, and Hunt-Lawrence pouch reconstruction (Duran et al. 2007). Reconstruction following total gastrectomy in an unstable neonate can be delayed and performed at a later stage.

Following repair of the perforation, the abdomen is lavaged with warm saline. Peritoneal drainage is not needed for most primary repairs and has not been shown to reduce postoperative complications but is used routinely by some surgeons. The fascia and skin are closed in standard fashions. Postoperatively, supportive and resuscitative care is continued. The child is maintained on broad spectrum antibiotics, gastric acid suppression therapy, and total parenteral nutrition. The stomach should be decompressed. Feedings are held until the infant has stabilized. Many surgeons obtain a contrast study prior to initiating enteral feeds.

The surgical management of gastric perforation in neonates has remained largely unchanged. However, the overall mortality is changing. Yang et al. (Yang et al. 2018) reported results in the largest cohort of neonatal perforations in 68 patients and found that the overall mortality had decreased from 100% during 1980–1989 to 16% during 2010–2016. Similarly, a Japanese study showed a mortality rate of 14% among 42 neonates with gastric perforations (Sato et al. 2017). Chen et al. (Chen et al. 2018) reviewed 168 cases of gastric perforation in the newborn and reported that the single most prognostic factor was prematurity, with the mortality being significantly higher in preterm neonates.

Gastric perforation in the newborn is a rare event, but with early recognition, appropriate care and adherence to principles of surgical management survival can be maximized. Causes of gastric perforation may be multiple including idiopathic and spontaneous perforation. Recognition of the patterns of symptoms related to gastric perforation will aid in identification of this rare clinical condition. Careful attention to preoperative preparation will aid in a successful repair. Operative principles include control of spill of the luminal contents, debridement of devitalized tissue, and closure of the defect. Postoperative care includes supportive measures, broad spectrum antibiotics, and gastric acid suppression. Nutrition plays a key role in healing with TPN until the stomach is healed. Contrast study of the stomach may be considered prior to initiation of intestinal feeds.

Gastric perforation remains a poorly understood and rare event in the neonatal period. Associated risk factors are poorly characterized, and future investigation may help define which patients are at the highest risk (Yang et al. 2015). These patients may benefit from gastric acid suppression or other trophic factors to support the stomach. Gastric perforation may be in the same spectrum as necrotizing enterocolitis or spontaneous intestinal perforation. Investigation related to improved understanding of those processes may provide improvement in the understanding of gastric perforation.

Previous studies have shown the relationship of the C-KIT+ mast cells and the interstitial cell of Cajal to gastric perforation. These underlying cellular and molecular deficiencies are poorly characterized and may represent future targets for therapy or possible preventive strategies.

Finally, technology has assisted in the development of minimal access techniques and minimal access instrumentation. Future instrumentation may be even smaller, and this micro-access approach may allow even more technically complex procedures in the neonate. Advancements also allow endoscopic procedures in the neonate which have been limited up to this point by the size of endoscope and the available instrumentation. In humans and animal models, gastric perforation has been successfully approached using endoscopic clips (Maekawa et al. 2015) and suturing techniques (Halvax et al. 2015).